A Slice of Somnium Space, a Slice of the Future

The Tertiary Land Offering (TLO) started today, November 14th. The perfect moment for explaining why owning virtual NFT land parcels, WORLD’s, avatars and/or cars isn’t as crazy as some people think it is.

Somnium Space is charging ahead. More and more users join Somnium and understand the benefits of this open, persistent, blockchain based VR world. They participate in events, socialize, build and do business. Not everyone is convinced. There is actually quite some skepticism. And while one should always be open to discuss any hesitations people may have, a lot of the skepticism is rooted in a lack of understanding.

One response I often encounter is that the Metaverse is fake and that we should spend our energy on changing the real world instead. But this is creating a straw man. Calling it fake is a misrepresented proposition, so much easier to argue against (who wants ‘fake’ after all) than a real thing. Calling it real and present solid arguments for why we shouldn’t develop the Metaverse is so much harder. But here’s the thing: Somnium Space is real. The Internet is real. Your bank account is real. It is digital, but real.

What is also real is that people seek connection and gather around common interests. It warms us when we feel connected and can communicate. Historically, we communicated via letters. As communication technologies evolved, we started to call people, which brought us closer due to the higher empathetic bandwidth of voice. And today we can engage in video conferences and see those with whom we are speaking.

And now with Somnium Space and similar worlds we are beginning to see the ability to share social presence and spatial awareness with other people by ‘physically’ sharing the same environment.

It’s called innovation and innovation is a fundamental human quest for progress. Not all innovation is equally beneficial of course and we should always ask ourselves whether we want to go down a specific technological road. But calling things fake is like sticking your head in the sand.

The right question to ask – now that we know that Somnium Space and the Metaverse are real – is whether it is a good innovation.

Facebook morphed into Meta, but it is the same old company dreaming dreams of power. Their user data driven business model is not going to change. And it grows in fertile soil. It’s shocking to realize how easily humanity has surrendered control over their data and their privacy at the prospect of convenience and free services. But apathy or resignation that things can never change and that we are forever stuck with how things are done today is contrary to everything that drives us forward as a species.

This is where decentralization, digital ownership and global outreach come in. Or in short: Blockchain technology.

Somnium Space is not only about new ways for people to interact in an immersive environment. It also represents a change from centralized data-driven business models to a decentralized model where people will own their data and creations. It’s a promise of a fairer playing field for more people, allowing them to actively participate in an economy even if they are deprived of access to central institutions.

We’re only scratching the surface obviously. Nothing is black and white and every technology has a up- and downsides. But Somnium Space, the Metaverse, is a logical next step in the technological evolution. It is also a fundamental new direction and not just a new medium. It is an opportunity to break away from mistakes of the past. As we project ourselves deeper into the digital realm, blockchain and crypto will facilitate revolutionary, decentralized models, which will make the Metaverse accessible, fair, thriving, content rich, economically fertile and an amazing new way for people to gather and interact.

There is nothing fake about it. It’s as real as it gets.

The question: Will you join Somnium Space to share some real experiences with other residents? You do not have to purchase land as you can enter for free. But in case you would like to unleash your creativity in an open, persistent, blockchain based VR wonderworld, make sure to check out the Tertiary Land Offering (TLO) that started today November 14th and will run until December 18th.

Owning a land parcel in Somnium is real and tangible and so are the experiences you build on top of them, with or without Somnium WORLDs, which are also on sale during the TLO. Your identity is real as well as fellow residents will get to know and recognize you by your Avatar (also on sales). Or by the car that you own and drive. And yes, cars are on sales as well. 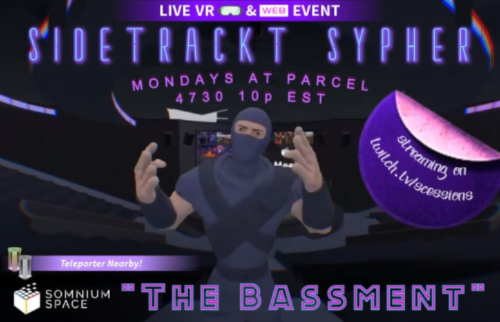